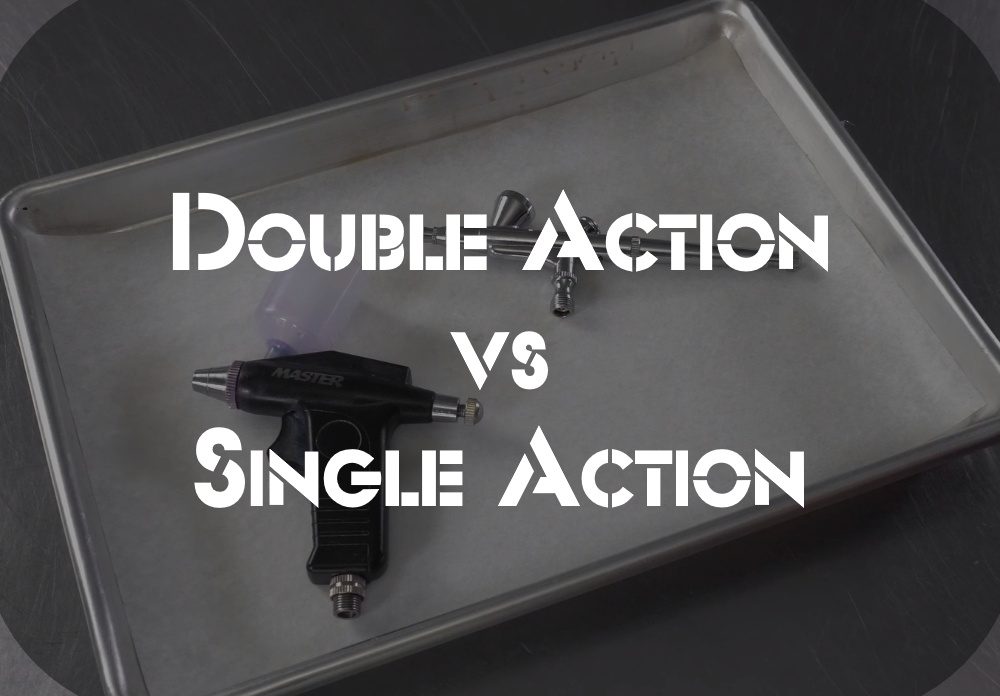 The following explanations deal with the differences and advantages of Single and Double Action guns. This is about the aspects within the function, the spray pattern, the cleaning, and handling. A final recommendation should then be made as to which airbrush gun is recommended for which type.

There are predominantly two airbrush guns to choose from Single Action and Double Action in the world of airbrushing. The individual differences are to be discovered and which is more suitable for personal needs, shown to you below.

The main technical difference between a double-action and a single-action airbrush gun lies in the operating lever and its function. Its design is fundamentally different. In the Single Action, it is immediately connected to the needle so that it already releases the paint for spraying together with the compressed air.

The air supply is independent of the ink outlet with the Double Action function. First, you have to press the control lever down. Only one stream of air comes out of the nozzle. Only when you pull it backward does more and more airbrush paint come out.

The spray pattern is essentially the same for both gun types. You can create a finer or coarser spray pattern with them equally. The viscosity of the paint, the pressure of the compressor, and the size of the nozzle are responsible for this.

The working pressure of the compressor can also be set the same. The personal working pressure is more demanding when using the double-action gun because you have to push it down first and then pull it back. This can give the feeling that operating the double action gun is somewhat more strenuous, as the index finger is more under tension.

In cleaning, the guns are almost the same. The most significant risk of contamination is the nozzle and airhead. They can often be removed similarly and have less to do with the control above the lever.

However, the cleaning needs of a double-action gun may be somewhat increased at one point, such as when the paint overflows if the hopper is stuck or when paint bubbles into the opening of the control lever. This can affect it more in terms of function than a single action.

It then shows the hooking or sticking of the lever, making it harder to pull or push. Cleaning must then be done. It could turn out to be a bit more elaborate, which will entail a more extensive scope with a brush, airbrush cleaner, and, if necessary, disassembly as well as a thorough soaking.

In the handling of the Double Action, you will always notice a little more tension on the finger or hand due to the additional pressing of the lever. The Single Action shows a somewhat more relaxed technique at this point when airbrushing with the index finger.

On the other hand, it requires more sensitivity for isolated drying work, as it reacts correspondingly faster about paint discharge.

Single Action vs. Double Action: Which is better?

Of course, opinions may differ on this question, with both camps arguing in opposition. The nuances of both pistols are honestly excellent, and unlimited possibilities are open to both.

Basically, the question is always what the artist primarily wants to do. The recommendations below are also based on this, but they should be evaluated more in a tendency.

Assuming that the following areas are more or less turbulent and are influenced by external circumstances, these recommendations are also based on this.

As a further aspect for the recommendation, the recommendation also serves that with some painting grounds, the accident-free drying of the gun is more needed than with others. In this case, double action is also the better and safer option. Therefore, it tends to be more suitable for nail art, custom painting, model making, makeup, and food decoration.

The Single Action is more suitable for those artists who work with a pure drawing board and a great deal of masking. The time required for airbrushing is reduced in favor of the masking work. Drying usually happens on its own in the meantime. Technical illustrations or photorealism would be concrete examples here.

In the case of many intensive spraying jobs with large areas, the abovementioned relaxation of the finger or hand must be considered. Here the Single Action has a clear advantage. That is why it is more likely to be used for body painting and spray tanning. Because here, the color dries very quickly on the skin and needs the Double Action function less.

Which is better: Single Action or Double Action?

This question is generally a little more challenging to answer. However, if you need many drying processes with one gun, you should feel freer with a Double Action gun and don’t have to worry about paint spraying out again and again. However, if you are familiar with the technique, you can manage it with the Single Action.

However, it happens repeatedly that paint could also spill onto the control lever. As a result, the Double Action works harder or hangs. The cleaning frequency can therefore be a bit higher and more intensive.

Which design airbrush gun is better for nail art?

Since you have to dry a lot with the gun for nail art to go faster on all fingers, the double action is recommended overall for uncomplicated and accident-free use.

In addition, such a gun is preferred, which has a small but tight flow funnel with a lid. This gives you a clear view and prevents the paint from spilling out unintentionally.

What is a single action airbrush good for?

A single action airbrush is good for basic tasks such as spraying a background or primer, or for creating detailed line work. It requires more effort to use than a dual-action airbrush, but it’s also less expensive and simpler in design. For these reasons, it’s a good choice for beginners who are just learning the basics of airbrushing.