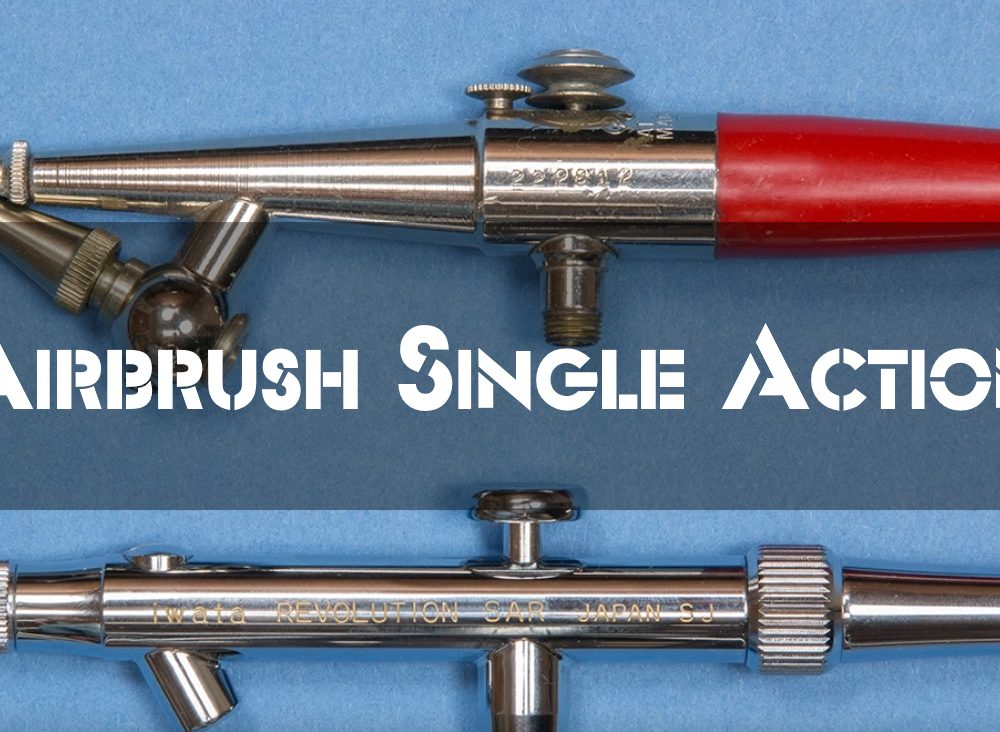 If the beginner does not yet own an airbrush gun, he faces a crucial question in terms of airbrushing at the beginning, whether he should purchase a single or double action airbrush gun. Both have minor technical differences. In the following, we will therefore discuss the unique function of the Single Action, where it is mainly used, and what advantages and disadvantages it has.

What is a single-action airbrush gun, and how does it work?

The airbrush guns are mainly divided into single and double action guns. With the single-action weapon, you move the lever for the air and paint supply in only one direction and only with “one function” (= single action) so that the air immediately flows through the gun, and then more airbrush paint is added quickly.

The lever is directly coupled with the needle so that the hand moves simultaneously when the lever is actuated.

Each single action pistol is designed a little differently. So each has a little more or less play at the beginning. Some are a little better at giving you the feel for the separation of the air and paint supply.

You’ll notice it because the initial draw is very smooth. The color comes in when you see a little more resistance. That’s when the needle is first pulled back, and the paint sprays through the nozzle. Otherwise, it depends on the actor’s sensitivity to how much paint is let out.

The range of application of the single-action airbrush gun is in principle just as wide as one with double action function. Since it is usually somewhat easier to operate and does not require constant finger pressure, it is ideally suited for continuous spraying applications.

This includes, for example, presentations at trade shows or the intensive and prolonged spraying of backgrounds on large areas.

Otherwise, only the nozzle size is decisive, which details you can and want to spray. In terms of these requirements, it does not differ from the double-action airbrush gun, and you can achieve an attractive design with any type of airbrush gun. Therefore, you should not be irritated by contradictory references at this point.

Advantages and disadvantages of single-action design

The following are the most significant advantages and disadvantages that individual airbrush artists state in this regard.

The advantages are that you don’t have to “forcefully” push the lever down first. If, for example, you have bought a pistol with a double-action function without having tried it out first, this can mean a relatively high effort, depending on the model.

This may not be noticeable at first. But after a while, you realize that the handling is quite strenuous in the long run. Some may even complain of a slight cramp on the finger, which they recognize immediately during spraying or only in the evening afterward.

Sometimes pressing down on a double action gun is actually more complex. This is because dried paint has run down the lever and makes it difficult to operate. You then really have to push harder or clean that area.

You won’t experience the heavy squeezing with a smooth-action single-action gun and can last longer accordingly.

For airbrush beginners, the operating function can be a bit too sensitive or one-sided. In the beginning, they will not yet have the feeling for it, when actually the paint comes out, and to what extent.

They may also sometimes act lost in thought and thus make mistakes. The danger of an “over-spray” on the painting surface could be the result.

In the beginning, it is crucial with which pistol is learned. In principle, therefore, a professional and a beginner can already approach the single-action gun and recognize its easy handling.

However, if there is a risk that the beginner is still very insensitive to the matter or is even afraid that he might work a little unfocused, he should start with a double-action pistol. It then separates razor-sharp between air and color supply.

The answer can not be clearly given, which is better or worse. However, if the user performs many types that are simultaneously in the range of merely drying the substrates, he should carefully consider purchasing the Single Action.

These would be, for example, in the areas of model making, in nail studios, with 3D printing models, or in body painting, where you will do a lot of intermediate drying with the airbrush gun. Of course, no unintentional spraying errors should occur, which are virtually impossible with a double-action airbrush gun with clear separation of air and paint supply.

What PSI do I need to run an airbrush?

PSI depends on the type of airbrush, the paint being used, and the desired spray pattern.
Generally speaking, the higher the PSI, the smaller the particle size will be. So for fine details or lettering, a higher PSI is needed. For broad spraying or filling in large areas, a lower PSI is better.
It’s best to start with a lower PSI and increase it gradually if needed until you achieve the desired results.